skip to main | skip to sidebar

What are the main applications for tungsten carbide?

We use Tungsten Carbide every day in a variety of products, for use in a number of different applications throughout many industries. It is an incredibly versatile and useful material due to its unique properties.
There are many different applications within the Oil and Gas Industry from exploration to drilling and pumping where hard and exotic materials are commonly used.

This is partly due to the hostile subsea environment that they operate in and the length of time the components are required to perform without any issues, but also because of the accuracy and tolerance that can be achieved and maintained in hard materials.

Many of the components used in these applications are made from Tungsten Carbide due to its superior strength and stiffness, excellent reliability and abrasive wear resistance. Silicon Carbide is also common in certain applications.

We manufacture various Tungsten Carbide components designed for the oil industry, including;

Our experience within this industry has taught us how valuable product life is. We would usually make suggestions from a variety of available Carbides, the most suitable material for harsh working environments such as subsea and/or continual wearing.

We are positive that we can provide a more efficient, longer lasting solution to suit your requirements.

We also pride ourselves on the ability to craft compact Tungsten Carbide gas components including;

Tungsten Carbide is a perfect material for use in challenging wear applications such as the control of material flows in pumps.
Posted by James Gazzard at 03:50 3 comments:

Does Tungsten Carbide have much elasticity?

Poisson's ratio is the ratio of transverse contraction strain to longitudinal extension strain in the direction of stretching force.
Poisson’s ratio is the relation of the strain transverse to the length of the tension sample and the longitudinal strain. It is a calculation of the transverse contraction of the sample in reaction to the tensile loading. If a section of homogeneous material is subjected to a tensile load and increases in length by a portion, it will exhibit a reduction in dimensions widthways. If the bar is maintained within the elastic limits of the material, the ratio of the strains will be a constant. 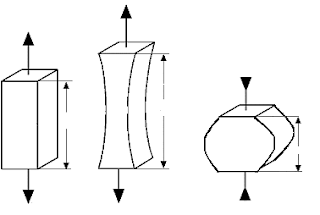 The compressive side of Poisson's ratio may most easily be described by thinking of a marshmallow held between two flat plates. As the plates are pushed together the marshmallow is compressed and squashes out. All metals, even Tungsten Carbide, squash out at least a very small amount. The ratio varies only slightly with the amount of cobalt binder.

The Poisson’s ratio of Tungsten Carbide is around 0.24, compared to Titanium which is 0.33.

This indicates the amount of expansion which might be expected when heat is applied to the material. The expansion rate increases with temperature increase. The more binder present the higher the expansion rate. Tungsten Carbide is about 1/3 to 1/2 that of tool steel.
Posted by James Gazzard at 01:18 4 comments:

How much strength does tungsten carbide offer?

“It was shown that TRS is closely related to the hardness and facture toughness. Within a hardness range of 800 < Hv < 1500 kg/mm2, TRS appears to first increase and then decrease as the hardness increases. It reaches a peak value at Hv ≈ 1300 kg/mm2.” Zhigang Zak Fang 2004.

Transverse rupture strength values are determined by the amount of force needed to break standard test pieces under the same test conditions.

Compressive strength is measured by compressing a right cylinder test piece between two tungsten carbide blocks held in line by an outer sleeve assembly. The CS of Tungsten Carbide is higher than for virtually all metals and alloys. This high compressive strength makes it possible to compress carbon at one million P.S.I. from man-made diamonds.

This measures the resistance of Tungsten Carbide to shock loading by a drop weight impact test. This is a more reliable indication of toughness than TRS readings.
Posted by James Gazzard at 06:22 1 comment:

What sort of hardness can be achieved? 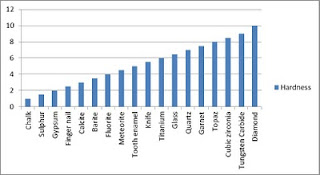 Rockwell Hardness
The hardness of Tungsten Carbide grades is determined by using the Rockwell hardness tester. A pointed diamond indenter is forced into the carbide. The depth of the hole is a measure of the hardness. The Rockwell "A" scale is used for tungsten carbide. Rockwell "C" readings are only shown on the data sheet so that tooling people can compare values of carbide against tool steel. The "A" scale is used on tungsten carbide because the lower indenting force of 60 KGs is less likely to damage the diamond than the 150 KGs force used on the "C" scale.

Moh’s hardness scale
Tungsten Carbide falls between 8.5 and 9.0 on Moh's hardness scale, making it almost as hard as diamond.
In order to polish or finish tungsten carbide, a diamond covered tool must be used because any other metal or mineral would not be able to withstand its hardness. Only a diamond is hard enough to be able to scratch Tungsten Carbide.
Posted by James Gazzard at 02:48 8 comments:

Why is the grain size important?

The story of Tungsten Carbide (WC) powder metallurgy, and particularly that of the hardmetal industry, is depicted by a progressively widening range of available grain sizes; whilst simultaneously narrowing the grain size distribution for each grade of WC powder.

The most significant motivation for this broadening of the range of available WC grades is the properties of WC hard metals such as hardness, strength, toughness, thermal conductivity and abrasion resistance can be extensively varied by grain size. At the start of the hardmetal industry the range of available WC grain sizes ranged from 2.0 to 5.0 microns, the grain sizes of WC powders now used in hard metals range from 0.5 microns to 50 microns, or even 150 microns for some very special applications.

The majority of grades we machine are made with standard size grains varying between 1 and 3 microns in size. Using larger grains of 2 - 6 microns will greatly increase the strength and toughness of the material because the larger grains interlock better. The tradeoff is that larger grain materials do not offer as much resistance to wear as finer grain sized materials. Sub-micron materials that vary between 0.4 and 1.0 micron grain size are harder than standard grain materials with the same cobalt content. The sub-micron grains are much more uniform in size and hence give improved hardness as well as increased carbide strength. However, as specs show the transverse rupture strength is perhaps 20% improved on 15% sub micron compared to 15% fine grain material but this can give a false impression as sub-micron carbide is not as resistant to impact and may chip more easily.

There are currently four carbide grades offered for die and wear part function. The first is the typical grade with a 1.5 micron to 17 micron grain size of tungsten carbide. The typical carbide grade is chosen where light, medium, or heavy shock loads are faced. It is commonly used in settings such as airless paint spray nozzles, valve seats, pump seals, cold heading fastener dies, cold impact extrusion punches, wire drawing and seaming rolls.

A submicron carbide is also selected where light, medium, or heavy shock loads occur, but when a fine, keen cutting edge is also required.
If the size of the grain is too large and the percentage of binder is too higher, then the carbide will deform under pressure. One of the major advantages of carbide is its proficiency to cope under pressure or compressive force. If it is too soft it loses that ability.

Neither binder percentage or grain size alone determines how a grade will perform.
Posted by James Gazzard at 06:10 No comments:

Tungsten Carbide - What impact does the binder have?

The binder in most grades of Tungsten Carbide is cobalt. The other binder used is nickel. The binder is added as a percentage by weight varying from 3% to 30%. The amount of binder used is a very important factor in determining the properties of each grade. As a rule of thumb the lower the cobalt content the harder the material will become. However variation in grain size and additives can upset this rule.

Tungsten Carbide permutations have a unique variety of properties, high compressive strength, hardness and resistance to wear, as well as a capability to endure shock and impact. Typical applications are seal rings, valves, linear bearings and blades.

Traditional Tungsten Carbides, with Cobalt binder, have limited corrosion resistance, making them unsuitable for applications in which the wear parts are functioning under both severe abrasive and corrosive conditions.

How many grades of carbide are available?

We use Tungsten Carbide every day in a variety of products, for use in a number of different applications throughout many industries. It is an incredibly versatile and useful material due to its unique properties

When choosing between the numerous distinct grades, it is important to understand what properties are required for the application. For example grade CD-630 is extremely hard wearing, but only able to cope with low impact, so it is perfect blades and seal rings. Whereas CD-70 is designed to endure high impact environments and is therefore perfect for manufacturing header dies.

The Tungsten Carbide properties chart, on our website, shows basic data for each grade manufactured. All specifications are designed and engineered for a purpose and rigid controls are kept throughout production processes to ensure adherence to grade engineering.

Quality control properties such as hardness, density, and minimum transverse rupture strength were determined from tests made on each batch of powder before it is used in the manufacturing process. Other properties such as Young's modulus of Elasticity, Poisson's ratio, Coefficient of Thermal Expansion, Thermal Conductivity and Electrical Conductivity are used by engineers for design calculations. Properties such as compressive strength, grain size and abrasion resistance give the designer additional information about the suitability of the grade for the part being designed

For more information, please contact us today
Posted by James Gazzard at 01:42 3 comments: